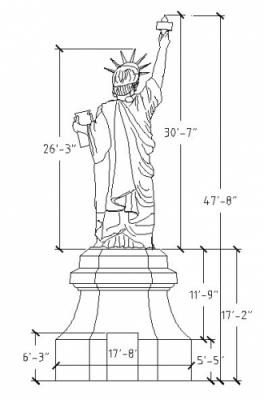 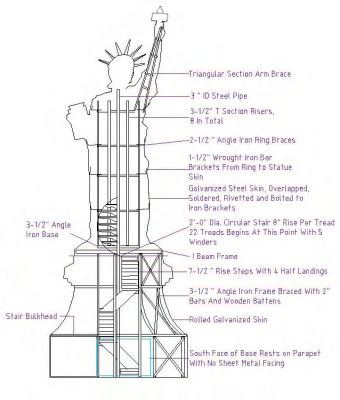 Little Liberty traveled to New York on a flatbed train car. and was installed in 1902. At the time, her placement ensured high visibility throughout the upper west side, and an interior staircase allowed the public to enjoy a prime view down Broadway until its closure in 1912.

On December 19th, 2001, the Athena Group, a New York developer, announced plans to renovate the building into apartments, with a four-story addition displacing the statue. The Athena Group pledged to preserve Little Liberty “under all circumstances,” and, on February 17th, 2002, donated her to the Brooklyn Museum. From 2005 to 2006, Conservation Solutions restored the statue and installed her atop a new, simplified base in the Brooklyn Museum’s sculpture garden.

The Brooklyn Museum has now offered to transfer Little Liberty to the National Building Arts Center, and work is already underway on a new base in the approximate shape and size of the original. This base, as situated, will allow the statue—and visitors climbing to its crown—a view of the Saint Louis skyline over the impressive industrial landscape of the east side.

We hope to have the statue in place in 2023, but we need your help to fund the transportation and reinstallation.

The estimated cost of the project is $40,000, including $25,000 for dismantling and moving the statue from New York to Saint Louis and $15,000 for installation atop the new base.

This acquisition does more than simply expand the Center’s collection—it allows scholars, designers, and craftsmen to study traditional pressed-metal (repoussé) statuary and construction and, just as exciting, expands the Center’s appeal to the general public throughout the region and beyond. We believe awareness to be key to the organization’s mission and hope you will support this ambitious effort to put us on the map.

If you would like to support this project, or for more information, please contact museum staff at staff@nationalbuildingarts.org.