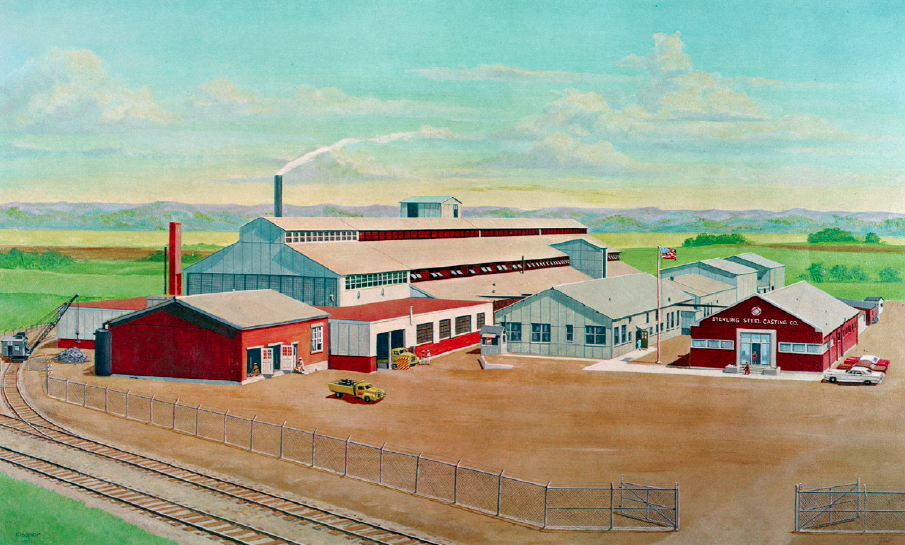 Painting of the Sterling Steel Casting Company foundry as it appeared in 1972. This is the home of the NBAC.

Sterling Steel Casting Company was started on June 16, 1921 as the realization of a dream of Mr. Raymond O. Shive to start a steel foundry when he purchased about seven acres of land in Centreville Township which is now in the Village of Sauget. He was assisted morally and financially by his home town school mate, Mr. Edmund D. Campbell. Mr. C. L. Harrell joined the group on January 12, 1922, when he and Mr. Shive signed a contract to buy the equipment of a bankrupt steel foundry in Baltimore, MD on July 10, 1922. Sterling Electric Steel Casting Co. was incorporated in the State of Illinois by Raymond O. Shive, Claude L. Harrell and George E. Baker, President of Baker Stove Company, Belleville. Illinois. The first directors were Raymond O. Shive, Claudee L. Harrell, George E. Baker, Frank A. Hunter Sr., of Hunter Packing Company, East St. Louis and Sam R. Galway of American Car and Foundry Co., St. Louis, Missouri. The original corporate name was chosen to explain the type of business. It was changed to Sterling Steel Co. in 1923 and to Sterling Steel Casting Co. in 1928. The original building was 100 feet wide and 140 feet long. Today’s buildings cover over seven times as much area and the land has been more than doubled.

East St. Louis was chosen as a location as it was a railroad transportation hub, being the second largest in the country. Not only was there a lot of manufacturing done in East St. Louis and St. Louis, Sterling acquired sales in oil field manufacturing castings in Oklahoma and Texas. In later years, their sales in the oil fields were diminished as the sales market was developed on marine deck fittings, construction machinery, mining machinery, bridge, crusher and pulverizer, freight castings, steel mills, tractor, truck, trailer and miscellaneous castings.

Production started January 12, 1923, and has been continuous ever since. The original employment was 28 people while present employment is 230 which has remained constant over the past several years. Original capacity was 65 tons per month, reaching a high of 520 tons during the Korean War. Higher quality and closer tolerance requirements have reduced production to 350 tons a month.
Sterling Steel Casting Co. is the second oldest independently owned company in the East St. Louis area, only surpassed by East St. Louis Castings Company, another foundry.

The East St. Louis, Granite City and Belleville area was sometimes called the “Pittsburgh of the West” and was well represented with foundries producing cast steel, malleable iron and gray iron. Today. the cast metals industry is the sixth largest employer in the United States. The trade associations of these three types of foundries have formed the Cast Metals Federation to publicize their importance to our economy. Sterling Steel Casting Co. is proud to be a member of this Federation.

All employees come from this locality and are promoted from within. Half of them are African-American. and only 2% of the stock is owned outside this area. In 1969, William J. Shive, son of the founder, acquired controlling interest. The third generation is now represented by Mr. Shive’s son, Scott, who has completed his management training course. starting as a common laborer and working in all departments.